Black History Month is a time to mark some of the most significant events and achievements in world history. To celebrate, we’ve curated a list of some of the best and most powerful black history documentaries. Take a journey through time from the famous March on Washington to the political and social inequalities of today, it’s all here to educate and illuminate …

Pitching itself as “a film 150 years in the making”, 13th is a lucid and unapologetically frank insight in to race relations in the US today and throughout history. Drawing a clear relationship between the 13th Amendment and the disproportionate rate of incarcerations in black males in America, the film calls the modern judicial system up for scrutiny. The 13th Amendment was enacted on January 31st 1865, abolishing slavery and making it illegal to subject forced labour upon any citizens ‘except as a punishment for crime’. This exception is one that the brand new Netflix documentary draws close attention to as it juxtaposes important historical events with today’s biased criminal justice system.

This two-part documentary tells the story of American baseball player Jackie Robinson, who famously broke the colour line in baseball when he joined the Brooklyn Dodgers in 1947. Until Robinson’s infamous first game, black players had been confined to play in ‘negro leagues’ and banned from participating in Major League Baseball. Jackie’s career was far from plain sailing and he experienced the brunt of generations of institutionalised racism, with many of his teammates refusing to play alongside him and whole teams boycotting his games. The story of an incredible spirit and bravery, Jackie Robinson the documentary reminds us of the impact one person can have in moving the conversation forward and changing history itself.

In 1957, the Civil Rights Act was passed by president Eisenhower and led to the eventual desegregation of schools in America as well as to universal voting rights for black citizens. It also kick-started a number of legislative programmes that over the years transformed the lives of African-Americans and gave them access to freedoms previously reserved for white Americans. A complicated and enduring process that took place over a number of decades, the 14 part PBS series Eyes on the Prize walks its viewer step by step through these revolutionary developments. Using historic archive footage as well as interviews with those involved in key events, the series is a comprehensive and detailed account of some of history’s most definitive human rights triumphs.

Most are familiar with the story of Rosa Parks, who on December 1st 1955 refused to give up her seat to a white passenger in the ‘coloured section’ of an Alabama bus. This act of so-called ‘civil disobedience’ was part of a greater network of demonstrations and Rosa one of the many protesters whose arrest changed history forever. Freedom Riders is one of the quintessential docs to watch during Black History Month, covering 7 months of protests that began in 1961. The ‘freedom riders’ were a group of activists, black and white, who rode together on interstate buses in to the still segregated Southern states in the early 1960s. This doc tells their story and of the surrounding mob violence that they were subjected to from pro-separation activists.

When Alan Whicker travelled to Louisville, Kentucky in 1967, it was to film the 93rd running of the Kentucky Derby, an annual horse race held in the town since 1875.  Whilst there, he came across a group of black activists campaigning to end residential segregation in the Southern states. Their threat was clear: if authorities did not open the housing market to include black buyers in predominantly white neighbourhoods, then they would execute a planned programme of civil disobedience during the derby festivities. In this important and topically resounding documentary, Alan interviews a young Cassius Clay (who later renamed himself Mohammed Ali), who starts of the film with his immortal quote “my people are more important than a few horses running.” You can watch the full programme for free here on the BBC website.

The March on Washington in 1963 saw over 250,000 people take to the streets of America’s capital in support of racial and social equality. It was there at the Lincoln Memorial that Martin Luther King Jr made the famous “I have a dream” speech that became the voice of an entire people, tired of the years of racial discrimination that had separated neighbours and community members. This BAFTA-nominated documentary tells the story of the march from its inception, including the challenges faced by organisers as well as the ordinary people who turned up that day to stand for equality. A compelling tale of victory and perseverance narrated by Denzel Washington, The March has expertly curated archive footage of the event to retell the tale in all of its historic glory. 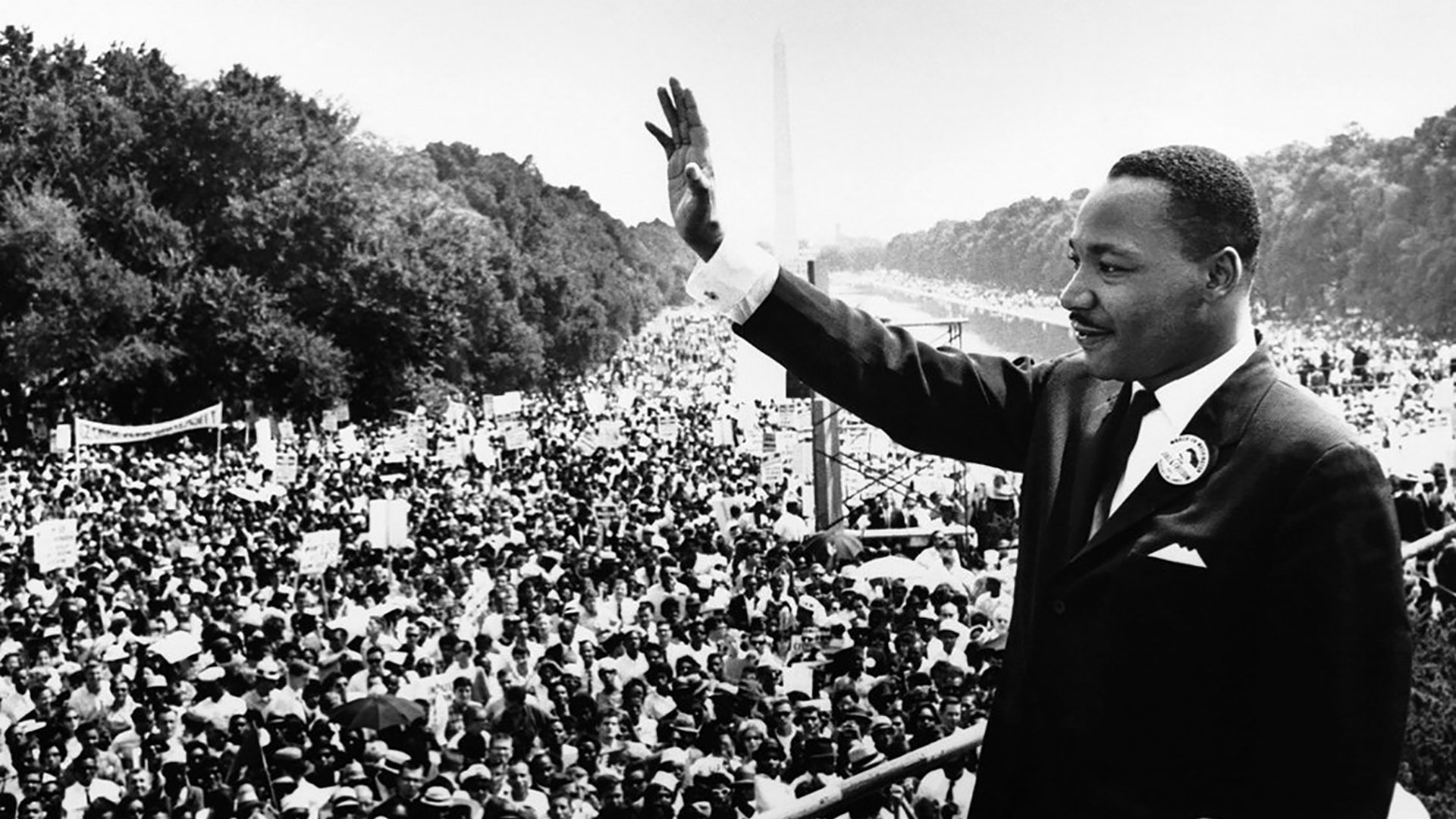 One of the most controversial figures in recent history, Malcolm X was both a champion of the civil rights movement and an open racial separatist. Believing in black superiority, he is seen by many historians as the antithesis of Martin Luther King and his resounding belief in equality and solidarity.  This honest and revealing documentary tells the story of a man who remains one of the foremost figures of the Black Power movement, his voice an expression of the anger of those consistently denied their civil rights. Malcolm X: Make it Plain is an exploration of his upbringing, political contributions and radical Islamic philosophy. From his early life as a street hustler in Boston and New York to his assassination by the Nation of Islam, a group which he was formerly a member of, the film unravels an often misinterpreted and disputable historical figure.

The Black Panthers: Vanguard of the Revolution (2015)

This documentary follows the rise and fall of The Black Panthers, a party who played a short but important part in the civil rights movement in the 1960s and 70s. Stanley Nelson Jr’s film combines archive footage with interviews of surviving Black Panther members, white supporters, journalists and FBI agents, giving viewers a compelling introduction to the movement and a turbulent era in American history. The film  examines the broader significance of the party in American culture, how the group helped to awaken black communities both culturally and politically, and the painful lessons endured when the movement derailed.

The multi-award winning The Black Power Mixtape 1967-1975 uses found footage shot by Swedish journalists in 1960s and 70s America and examines the civil rights movement and evolution of the Black Power Movement. The film features interviews with leading African-American activists, artists, and scholars, as well as those involved in the movement. It delves into subjects relevant to the era such as opposition to the US’s involvement in Vietnam, the Black Panther Party, COINTELPRO and the War on Drugs. The documentary received wide appraisal and has been described as “a time capsule of a turbulent era” – essential viewing for those interested in understanding America’s past and present.

One of the most iconic historical images of the civil rights movement is that of athletes Tommie Smith and John Carlos taking part in a civil rights salute on the medal podium at the 1968 summer Olympics. You’d be forgiven for thinking that – while the two American Olympians in the photo represented the struggle for civil rights – the Australian man stood quietly beside them represented the apathetic and dismissive stance of the white population. In fact Peter Norman took part in the protest too, wearing a matching Olympic Project for Human Rights badge, and was the one who suggested that Smith and Carlos could share the single pair of gloves worn by the pair in the photo. Norman was opposing his country’s own discriminatory ‘White Australia’ policy. Salute examines the importance of the event to the black civil rights movement in America and Australia. The film includes interviews with Smith and Carlos, as well as Norman, who was subsequently excluded from the Australian Olympic team in 1972 and ridiculed by his country for supporting the movement.

This short television documentary for ITV’s World in Action looks at the influence of Steven Biko, a co-founder of the 1972 Black Peoples’ Convention in South Africa, which aimed to overthrow apartheid through nonviolent means. Biko died of injuries he sustained while in police custody in 1977, and his death had a profound impact on the the fight for civil rights in South Africa as well as how apartheid was perceived abroad. His death sparked outrage and protests across the country, and Biko became regarded as an icon for the anti-apartheid movement. Featuring interviews with his family and friends, the film documents how Biko spearheaded the Black Consciousness Movement and strove to improve the lives of black communities in the country. The documentary can be watched on YouTube here:

The 2008 Presidential Election will be remembered as one of the most significant in American history, as Barack Obama became the United States’ first black president. The first episode of BBC documentary mini-series Inside Obama’s White House captures the President’s first 100 days in office, beginning with his election night victory and the wave of nationwide optimism that followed. With unique access to Obama, his inner circle and political rivals, the documentary series follows the President as he tries to reshape the United States. The series documents key moments in Obama’s presidency including his attempts to close Guantanamo Bay, his healthcare legacy “Obamacare”, his goal to end George Bush’s wars in the Middle East, 2012 re-election and his attempts to tackle gun crime.

Ferguson: A Report From Occupied Territory (2015)

When unarmed black teenager Michael Brown was shot and killed by police in Ferguson, Missouri in August 2014, it sparked protests around the area and drew the concentrated attention of the international press. Journalists Tim Pool and Orlando de Guzman were on the scene and captured the frustration within the community, speaking to Ferguson residents and filming their exchanges with police. The film examines the factors that led to unrest in Ferguson, including the institutionalised racism that still exists in America. Moreover, it pays tribute to an ongoing movement which has since swept across the United States and beyond, which aims to tackle police brutality, systematic racism and racial inequality within the criminal justice system. You can watch the documentary via YouTube below.